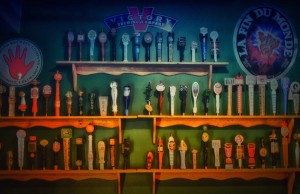 Here in the Dog House we have a policy: If you can’t say anything nice about a restaurant, don’t write a review.

Such was the case a few years back when we visited the New World Tavern. We ordered a couple of classic pub dishes — a Middle Eastern sampler and chicken wings — and found them to be so tampered-with as to be unrecognizable, and terrible. We’ve blocked out the details, but it was something like hummus made with butternut squash instead of chick peas, garnished with peppermint sticks.  Something like that.

But during a recent visit to the Waterfront Grille in New Bedford, Brenna, our enthusiastic bartender, told us a new chef has dramatically improved the food at the New World Tavern.  The context was that we should stop by the Pillory Pub at the Plymouth waterfront sometime before it closes for the season on December 1, because she works there nights and it’s a cool spot, then head up the hill to the New World Tavern for dinner.  Her perspective was a combination of restaurant insider and Chamber of Commerce pitchperson, and we were sold.

So with no other plans for a chilly Saturday evening, we headed over to Plymouth’s waterfront. The Pub is across the street from the state park that houses the famous rock and the Mayflower II, and its expanse of open windows is probably a great vantage point for people-watching on a warm summer evening. Approaching the Pub with November winds whistling across the harbor, we were a little alarmed to see the accordion windows peeled back to expose patrons huddled in blankets.  The heat is well managed inside, though, and Brenna served up a Mayflower IPA on tap for the Big Dog and a 14 Hands cabernet for Gina.

We walked up North Street to Court Street to find the New World Tavern packed with people, but with minimal effort we slid into a tall cafe table next to six 20-somethings who were out on the town, and listened for a while to Tom Fey singing folksy music and accompanying himself on a guitar.

The beer is the star of the show here, and the New World Tavern touts its 32 beers on tap and 120 bottles.  The Big Dog chose Mayflower’s seasonal, Thanksgiving Ale, and while Kelly our server clearly thought that was a good choice, the Dog found it surprisingly more like a stout and less hoppy than his usual IPA.  Gina ordered serviceable cabernet.

The Big Dog ordered a chicken proscuitto sandwich ($12), a salty concoction served on a ciabatta roll, with the slab of proscuitto topped with asiago and a big pile of arrugula.  We liked it, and liked the crisp waffle fries that came with it.

Gina is on a quest to find the best fish tacos in New England, and wasn’t disappointed here.  Nuggets of fried fish were served with a fresh tomato salsa and topped with a tangy buttermilk sauce.  For $14 it was a fairly generous portion of three flour tortillas strung together on a skewer. The menu mentions pineapple and salsa verde, both of which, if present at all, were very subtle.  The tacos were very good.

As we ate, crowds were streaming in to see The Sleepeaters in the back room, an intimate venue with a second bar.  Up front, we could hear the band open with the Rolling Stones’ “Dead Flowers,” but the volume didn’t preclude normal conversation.

Brenna was right about the New World Tavern, and on our way back to the car we stopped in to tell her so. The menu is weighted towards pub specialties that pair well with beer — pizzettas and burgers each have their own section — with some interesting surprises, like braised rabbit, that we’ll have to return and try.  But it was also clear that the days of freeform experimentation are gone.  The experience was enough to make us rethink our rule, to say: If you can’t say anything nice about a restaurant, give it another try.

This entry was posted on November 24, 2013, 1:54 pm and is filed under Good Wine/Beer Selection, Pub, Restaurant Review. You can follow any responses to this entry through RSS 2.0. You can leave a response, or trackback from your own site.