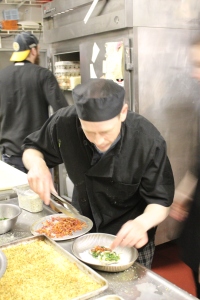 As part of this year’s Wareham Oyster Festival week, we had the opportunity to spend some time in the kitchen of the Stonebridge Bar and Grill with chef/owner Justin Hadley.

Hadley, who has run this kitchen for a dozen years, has gained a widespread reputation for creativity, while recognizing that diners value food that is consistent, fresh, and a great value. It’s an unusual combination for a restaurant that also offers an idyllic waterfront view, with a deck perched over the Stonebridge Marina in Onset.

On the night of our visit, Hadley was experimenting with an oyster special that displayed his special twist on the classic Rockefeller treatment.

He opened a pair of oysters and sat them, bowl side down, in a bed of kosher salt.  “It infuses a little flavor, maybe, and keeps them upright,” he noted.

On these, he placed some chunks of bleu cheese, the element which kept this from being a true Rockefeller recipe, but which added a rich earthiness which clearly enhanced the original.

He then added a layer of scallions sautéed with spinach. While we were surprised at the tangle of scallion, Justin said many oysters Rockefeller recipes call for it in lieu of chopped onion or shallot.

Then came a generous, course crumble of cooked bacon.

Finally, Hadley hauled out a tray of a toasted panko concoction and insisted that we sample a pinch, then another. We could imagine eating this stuff by the buttery fistful from a cardboard tub at the movies, it was that good. The crumbs were mixed with butter, parmesan, butter, a hint of red pepper, and butter.  He topped each oyster with the crumbs, then put them in the convection oven for five minutes.

The result was rich, bright, cheesy, salty, and crunchy – all of the characteristics of a perfect bar snack.  He served the pair of oysters on a bed of organic baby spinach with two grilled half lemon quarters

The Stonebridge Bistro’s specials were part of the second annual Wareham Oyster Festival.  A week of culinary and educational offerings centered around the oyster culminate annually in a street fair on the first Sunday in May on Main Street.

For more information about the Wareham Oyster Festival, visit warehamvillage.org.

The Stonebridge Bistro is located at Five East Boulevard in Onset; visit stonebridgebarandgrill.com for information.

This entry was posted on April 30, 2015, 12:29 am and is filed under Dining with a Great View, Pub, Seafood Restaurants. You can follow any responses to this entry through RSS 2.0. You can leave a response, or trackback from your own site.